The diamond band saw BS270 in its standard version 270F is a machine which is X-direction driven.

When equipped with an NC-driven 2-axis machine, it is available in the version BS270 FY.

Optionally the sawing forces can be used for feed regulation and shown on the display. The feed force occurring during sawing is shown on the display and feed as well as cutting speed can be manually tuned or regulated automatically in accordance with the programmable nominal force.

Both dry cutting and cutting with coolant are possible.

The basic version of the BS270 F with moving column is composed of a band unit with two deflection rollers D = 266 mm with a passage (H x W) of 195 x 255 mm. The diamond saw band runs over two rollers in an endless loop. It is driven and pneumatically tensioned by the height-adjustable upper roller. The band is driven by a 0.75 kW three-phase current motor controlled by a frequency transformer. The band tension is set by the adjustable air pressure on the pressure reducer. The speed of the band can be set between 200 and 2200 m/min using the control dial.

The travel of the band unit is program-controlled with a ball screw and the servomotor (X axis). Travel and feed rates are programmable. The band unit can be positioned with the help of buttons. Control: Mitsubishi touch-screen PLC control. The BS270 F is upgraded to the CNC-controlled 2-axis BS270 FY by fitting it with a servomotor-driven Y table.

It can be operated with a dry cut or alternatively with cooling. For dry cutting, a suction unit is attached to the exhaust connector provided. For the stainless version, pure water can be used for cooling.

During cutting, the feed force is displayed on the screen. This allows the feed and band speed to be optimally adjusted.

The band is cleaned by a set of high-pressure spray pipes. Because the saw band is cleaned under high pressure under the work area, the band returns to the cut completely clean.

Collecting tray with drain to coolant tank, coolant pump, coolant supply with shut-off valve and articulated pipe, automatic control of coolant system. A filter tissue of around 0.7 x 0.7 m can be inserted and replaced when necessary.

Machine housing with Perspex® insert to protect against spray 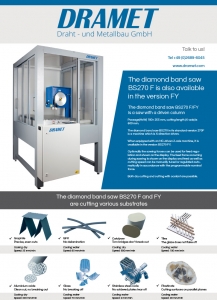 Our website uses cookies.
However, your IP address is coded in our evaluation so that we are not able to draw any conclusions about you personally.
We wish to understand our users in order to continuously improve our website. We are able to do this only if we know our visitors' behavior on the website. For this reason we use Google Analytics.